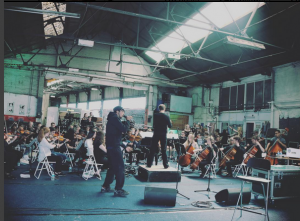 The work is a fusion of Grime and Classical orchestration, looking at the themes of youth, age and growing up.

The work was performed with Essex Youth Orchestra, conducted by Robin Browning, with arrangement from Peter Riley and commissioned by Charly Richardson lead officer at Essex Music Services lead partner in the Essex Music Education Hub. The live performance also gave VIP’s producer of the year winner Jake Shipton a chance to show off his live Ableton skills as part of the team with Max and colleague Jack Kingslake. The performance also showcased beats submitted by VIP students with live rap from Keion Smith another VIP user who submitted his raps on the site and was given a chance to shine alongside established artist Eyez.

In the programme notes Max Wheeler explains how the work came about:

“A Grime opera isn’t something you just sit down and write one day, and getting it performed with a full orchestra isn’t something that just happens. For this performance to come about we have been on a journey.

I have loved Grime music for a long time now, though I didn’t always like it. As a Hip Hop artist in 2002 or so when I first heard Grime, I was confused. The style of rap was strange, the beats minimal and starkly electronic. I didn’t get it. It started to make sense as I worked as a youth worker running community music projects across the country and one in particular, on an estate just outside Brighton, was where I really began to love it, and also to see its significance to the generation growing up with it. One of the young MCs from that project first became a peer mentor teaching other kids in the local area, then went on to become a successful professional artist with millions of views on YouTube, a massive fan base and gigs all across Europe. His name is Eyez.

Following that project I toured the world as an electronic musician (one half of the duo Anushka), trying to combine different styles, specifically Soul, House and UK bass music.

This is where Essex Music Services come in. Lead officer Charly Richardson gave me a call asking if I knew any MCs who might want to do a schools’ rap project. I said I knew just the guy – Eyez. Having looked for an excuse to play with Ableton software and live Grime sounds, I said I would be the DJ and supply the beats for the tour, which would be a great chance to reconnect with Eyez.

We met up in the studio in Brighton to put together some tracks for the tour and it was a big success. We met thousands of young people across Essex and had a lot of fun.

Talking to Charly (on my mobile phone in a car park in Harlow) I said it would be fun to do something with these tracks and that I’d been reading a book called The Rest is Noise about the history of Minimalism and atonal music. I said I could see some scope to combine Grime with some instrumental players. Charly said he wanted to do something with the Essex Youth Orchestra. An idea was born.

I wrote a collection of tracks from my studio, working with Eyez and writing for a choir that would join the tracks together into a narrative. Once the full demo was complete I worked with arranger Pete Riley to take my demo and map it across to the players available with the EYO and also to make sure some of my more esoteric orchestral ideas were actually playable!

Unbelievably, now only a year later, we have a full orchestral score for a half hour Grime opera, complete with a story, dramatic chorus, live beats and influences ranging from early Wiley to Steve Reich and all points in between.”

Live video of the performance is being currently edited and talks are under way for future performances on a bigger stage. Watch this space for more opportunities for students and teachers across the country to get involved.