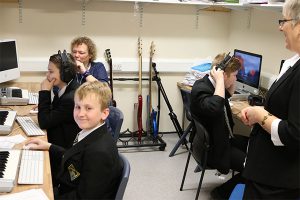 VIP Studio Sessions spent a day with students in Wakefield’s Castleford Academy as part of their House Music Masterclass prize.

Whilst there, VIP author Max Wheeler spent time in the Hearing Impairment department and got the chance to interview two hearing-impaired students who were producing songs using the step-by-step guides, which show students how to make music in VIP’s online studio in the genres they know and love.

VIP: Thank you for agreeing to the interview! We wanted to ask you some questions about your music and how it’s been going, and to ask you your advice for anyone else who wanted to make music, and what you’d learnt from the process of making it.

VIP: How would you describe the music you’ve been making?

VIP: So what types of beats have you made?

Cameron: I used keyboards and all that and added in extra voices.

VIP: What would you say is your favourite track that you’ve made?

Cameron: My favourite track is just full of weirdness. I just use a range of voices and put them together to make a piece of music.

VIP: And what would you like to do with your music now that you’ve made it?

VIP: And what about other people from the Hearing Impairment department, what kind of music have they been making?

Cameron: Just simple music like you’ve made in your music videos (VIP Tutorials). They’re doing fairly well. But I take it of course and just do what I like to do.

VIP: So what advice would you give to other people with hearing impairment about doing their own music project? How have you gone about it?

VIP: Which style of music did you find worked best?

Kevin via British Sign Language: His favourite part is the drums. That’s what he was concentrating on. They are very loud.

VIP: What would you like to say to anyone who’s listening to the music? Have you got any messages for them?

Cameron: I can help spread the weirdness.

Kevin: It’s fine for people to listen to it.

VIP: Do you have any message for other students out there with hearing impairment?

Kevin: Deaf people can get involved and do music!

VIP: Has it made any difference to your attitude to music?

Kevin: I was a little bit nervous before cos I didn’t know how to do it but I just get on with it now. I just enjoy the program and do it.

VIP: Well we just wanted to say that we were really impressed with what you did and very inspired. We think a lot of people are going to be really interested in what you’ve done so well done and good job!

Cameron: Thank you! Do we get paid?

VIP: We’ll let you know if it makes it into the pop charts!

From https://charanga.com/site/hearing-impaired-students-talk-experience-vip-studio-sessions/ on Tuesday 20th of April 2021 at 02:24 pm